Interview with the Billings Gazette in Montana back to all articles 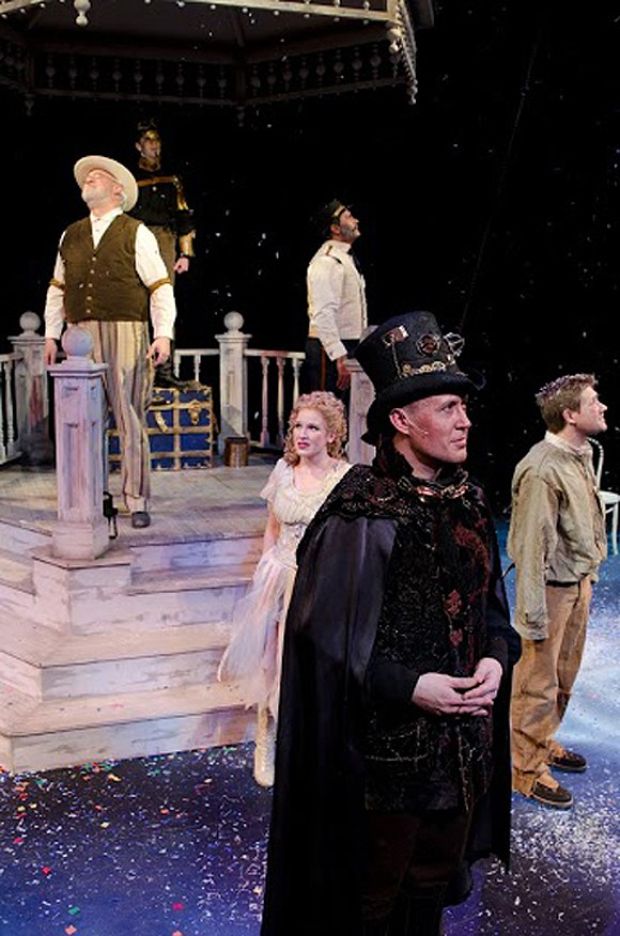 Amid the Beat Generation of the 1950s, two brave theater guys, Harvey Schmidt and Tom Jones, set out to make themselves a musical.

At the time, writers like Jack Kerouac rejected the Rogers and Hammerstein view of the world, preferring to show humanity through gritty realism. It was in that atmosphere that Jones and Schmidt revamped the 1956 Wild West version of what would turn out to be the “Fantasticks,” and put it up in May 1960 at a small off-Broadway theater in Greenwich Village. The show ended up running for 42 years.

Fast forward 50 years to the Nebraska Theatre Caravan’s new look to the show — the steampunk-inspired edition.

Steampunk, which came into prominence in the 1980s and ‘90s, mixes elements of science fiction, fantasy and alternative history where steam is the dominant source of power. Costumes for this production have working metal gears, vintage fabric and intricately embellished headpieces.

Director Carl Beck said the steampunk stylization of the musical adds to its allegorical story.

“Steampunk seems to lend itself to this story by finding beauty among the broken pieces,” Beck said.

Chad Bradford, in the role of the narrator and the bandit El Gallo, said he starts the show off with as much “theatrical magic as he can muster.”

“I take on this persona as the bandit, the kind of magician character who goes around and causes havoc in these people’s lives,” Bradford said in a phone interview.

The cast has been rehearsing the show and planned two stops before they travel to Billings to perform “The Fantasticks” on Sunday at 3 p.m. at the Alberta Bair Theater. The Nebraska Theatre Caravan tour will travel to 60 cities over 15 weeks.

“The Fantasticks” story follows two young lovers, Matt and Luisa, who live next door to each other, separated by a wall. Their fathers are feuding and Matt and Luisa can’t be together, so instead they fantasize about their life together.

Sound familiar? The plot sounds Shakespearean and Bradford said that is intentional. His character’s lines are all written in verse and that’s perfect for Bradford, who has spent the last four years performing in Shakespeare productions in New York City, where he is based.

The show is also allegorical as it attempts to point out the flaws in the idealized dream of true love being perfect.

“When the authors set out to write it, one of the things they wanted to celebrate was romanticism and at the same time to mock it,” Bradford said. “There are parts that are very sweet and romantic and then later when it falls down, it’s uncomfortable. At first everything is flowery and wonderful, but in the morning after it’s all over, his breath is bad.”

At the time “The Fantasticks” was ready to open in New York, the heyday of big musicals was waning and people questioned the producers for opening the production. “The Fantasticks” went on to become one of the most widely produced musicals in the world, with productions touring in 67 countries, including Afghanistan and Zimbabwe.

Bradford said part of the reason for the show’s success is its truth about relationships paired with a beautiful score.

“Matt and Luisa have to grow up and learn what it means to truly love someone, to have your own trials and challenges,” Bradford said. “They have to learn to see each other as a real person instead of an idealized role. This comes out of the Beat Generation rejecting societal norms. There is the civil rights movement and the sexual revolution and people weren’t comfortable with the ‘Oklahoma’ of the past. These beat writers were concerned with the truth.”

The most familiar song in the production is “Try to Remember,” which is sung in Act 1 by El Gallo, Luisa, Matt, and by their fathers Hucklebee and Bellomy. A reprise comes later in the play.

Bradford, a baritone, said this is one of the plum roles for someone who sings in his range and he put a lot of effort into his audition.

“It’s a golden-age classic and understanding where it comes from only enhances the experience for me,” Bradford said.