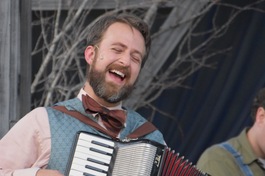 Originally from Little Rock, Arkansas, Chad is a director, actor, and composer based in New York City. Chad is a member of Actor’s Equity Association and has had the privilege to work all across the country.  Chad is currently the Associate Artistic Director for Shake on the Lake Shakespeare in Western New York.  During his time there, he has directed RICHARD III, TWELFTH NIGHT, A MIDSUMMER NIGHT’S DREAM, THE SANTALAND DIARIES, and ROMEO AND JULIET. Chad has acted Off-Broadway in New York City at the American Globe Theatre, among others, and with 5 different National Tours, playing lead roles in shows like MACBETH (Macduff), THE FANTASTICKS (El Gallo), and A CHRISTMAS CAROL (Scrooge). Chad has also worked regionally at such theatres as American Shakespeare Center, Farmer’s Alley Theatre, Pennsylvania Center Stage, Nebraska Theatre Caravan, Oklahoma Shakespearean Festival, and the Arkansas Shakespeare Theatre.

In partnership with the Magik Theatre in San Antonio and the Arkansas Shakespeare Theatre, Chad has also overseen, adapted, and directed shows for “Shakespeare on the River,” which feature his original family musical versions of Shakespeare favorites, such as TWELFTH NIGHT and TAMING OF THE SHREW, performed right on the famous Riverwalk in San Antonio.

Favorite recent credits include: Harold Hill in THE MUSIC MAN (Arkansas Shakespeare Theatre), Ferdinand in THE TEMPEST (American Shakespeare Center), and Jay and his alter ego Clair de Lune in MARE IN THE MEN’S ROOM (Off-Broadway).

Chad is also a recipient of National Art Strategies’ Creative Community Fellowship and founded Voices Uncaged, a program that has been dedicated to bringing theatre arts and education into prisons for the last 4 years.

Chad earned a B.A. in Theatre from the University of Central Arkansas, M. F. A. in Acting from Penn State University, and is currently finishing up a M. S. in Leadership for Creative Enterprises at Northwestern University.

“Where [the play] succeeds, it mostly involves the excellent physical comic abilities of Chad Bradford in the title role.”

“El Gallo, who was played by Chad Bradford, provided one of the strongest performances of the cast. His musical performances were strong, his on-stage presence played well along with the other characters, and his overall envelopment into the persona of El Gallo really brought a sense of trepidation for the fate of Matt and Lusia.”

“All of these portrayals of one of Shakespeare’s most enigmatic characters seemed “definitive” when I saw them. Then came this definitive but totally different portrayal by Chad Bradford . . . Bradford was endearingly goofy as he unconvincingly tried to play the part of a priest, twirling his crucifix and giving Juliet a resounding smack on the forehead when he blessed her.”

" . . . Chad Bradford’s Poor Tom is hysterical and so believable and threatens to steal the show!"

“The jokes and puns started within minutes, with Chad Bradford taking the stage.  […] Bradford played a delightfully melodramatic Romeo with relish… The actors worked their audience well, eliciting chuckles from every age as they lovingly poked fun at one of Shakespeare’s most prized plays.”